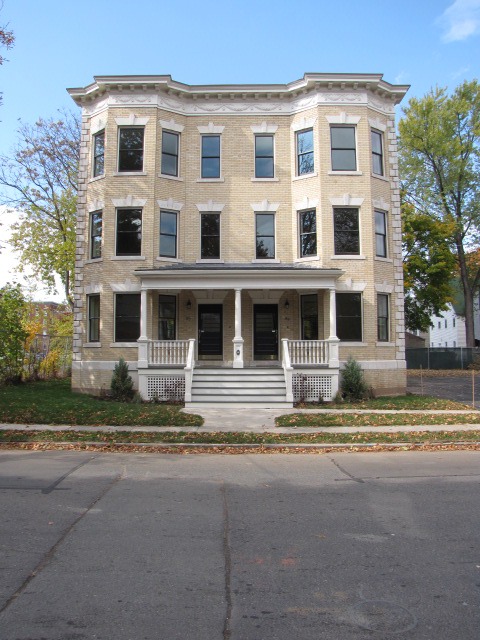 What a project! It's nearly as famous as the Victorian Lady, and rightfully so. It may have started as a Perfect Six, but once upon a time it was a derelict 33-room boarding house -- but that was before NINA got its hands on it. Co-winner with the City of Hartford, 2011 Hartford Preservation Alliance Award for the facade restoration and in-fill construction.

The homes at 87 and 89 Atwood Street are both halves of a former Perfect Six that was originally constructed in 1911. It was designed by locally renowned architect George Zunner, and it was built by brothers Louis and Morris Schoolnik. Morris, in fact, lived at 93 Atwood Street, the northern part of a duplex that used to stand just north of and now serves as the parking area for 87 and 89 Atwood Street.
The building that houses 87 and 89 Atwood Street stands out in the Sigourney Street District as a former Perfect Six. Along with several other Perfect Sixes found farther south on Atwood Street, all of which were constructed by the Schoolnik brothers, they represent the changing economy in Hartford as World War One approached. As industry ramped up along the Park River, Hartford’s population began to explode as people moved to the city for the increasingly numerous manufacturing jobs. The Schoolnik brothers, as well as other builders around the city, began to build Perfect Sixes throughout Hartford to provide housing for the influx of new workers, making the Perfect Six a signature style in Hartford.
NINA became interested in the property in June 2006. Despite the blighted condition of the building, the community still recognized the building’s potential, and NINA, which had just completed the successful rehabilitation of several historic homes on Ashley Street near Garden Street, decided to restore 87 and 89 Atwood Street to their former grandeur. Just as importantly, NINA saw a significant opportunity to create owner-occupied homes here, which was an important goal for both the neighborhood and for the City. NINA negotiated to purchase the municipal tax liens on the property in October 2006, and then it began the arduous and lengthy process to foreclose on the property.

This Perfect Six has all of the hallmarks of a Perfect Six as it is found in Hartford: an offshoot of the Colonial Revival style, it has precast lintels, an ornamental front porch, a classical sheet-metal cornice, and, of course, its monumental size. But it also preserves some of the individual flair of its architect – Zunner was well-known for his use of yellow bricks in his designs.

The interior was more than a gut rehab: everything within the exterior walls is entirely new, but every detail recreates the look and feel of a traditional Victorian home as it can be found throughout Asylum Hill. In some cases, original material from the building could be used as a guide, but in most cases NINA relied on its knowledge of the historical and architectural character of the neighborhood to make its choices.

The building was a Perfect Six, and it served its original purpose until the late 1970s, when it was converted to a 33-unit rooming house. It quickly became notorious as the “Trumbull Hotel,” and it was a magnet for drugs and prostitution. The City of Hartford, responding to complaints about the problem it had become in the area, stepped in to shut the rooming house down in 1997, but the building’s problems were really only just beginning.
It took NINA close to two and one-half years to complete the foreclosure proceedings, finally taking ownership of the property in June 2009. By that time, the building had been vacant for nearly 12 years; the roof had developed leaks, water had entered the building, and the structural integrity of the building had been severely compromised. In early 2009, the roof gave way under the weight of a snowstorm, and it took part of the upper south wall of the building with it. The City, which had already declared the building unsafe in September 2006, determined that the building was now a hazard, and it was ready to demolish the building entirely.

NINA forged a unique partnership with the City, the State Historic Preservation Office, and the Hartford Preservation Alliance, and ServCorps to save the building; the interior was a total loss, but the partners were able to save the façade. Many of the bricks were recycled, and they now form the north and south exterior walls of the building. From the street, the building still looks almost exactly as it did 100 years ago.
This is just a quick overview -- if you're interested in a more complete description of how we did this project, look no farther than just below this section.

This is a lengthy slide show that describes the building from the collapse of the roof to the start of our project and then all the way through to completion -- soup to nuts, as it were.