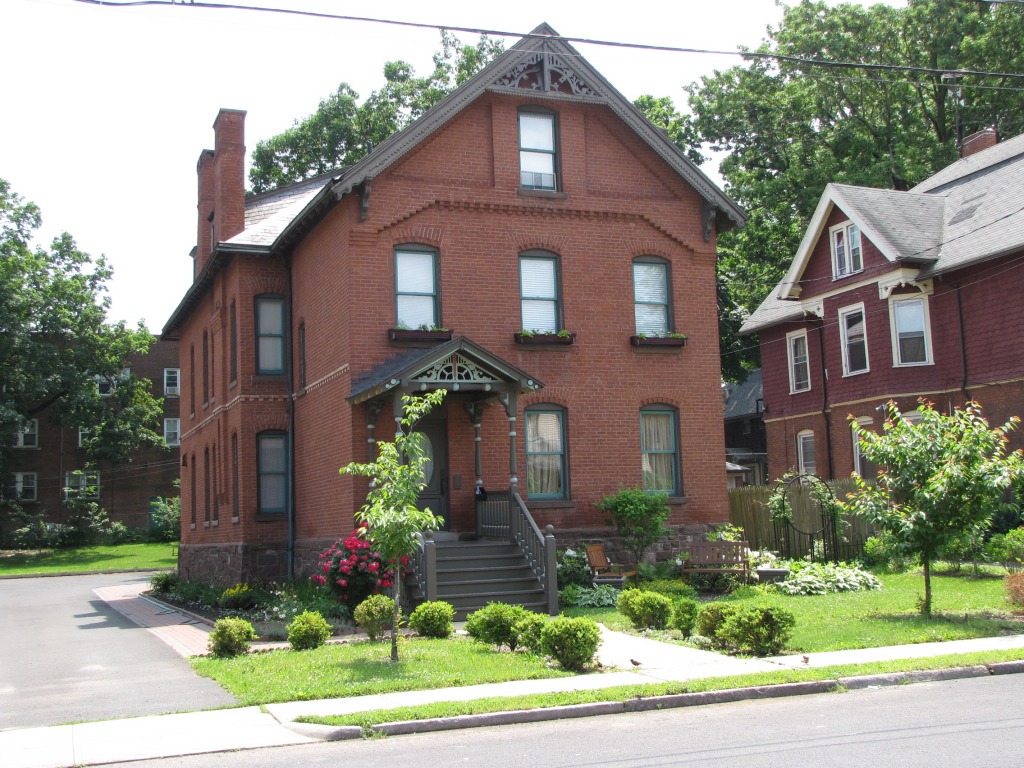 NINA moved this Victorian home one mile from its original location at 47 Sigourney Street, where it is now the centerpiece of seven historic homes that NINA and its partners restored in the area. The building, last used by Aetna as a conference facility, is now an owner-occupied single family home. This was a remarkable project -- people are still talking about it! Winner, 2005 Jeffery S. Czopor Award from Hartford Preservation Alliance.

21 Ashley Street was probably constructed in 1890 - but whenever it was built it wasn't built originally at 21 Ashley Street. Instead, it was built at 47 Sigourney Street. It is a Queen Anne house, which is very typical of this period, and it has slate gable and hipped roofs. Its front gable end strut and associated decorative woodwork illustrate the fanciful details made possible by the new steam-powered mill workshops in Hartford that took full advantage of the new technology and the social acceptance of wood as a fashionable building stock. Its brickwork continued the tradition of high quality and imaginative brick laying that dominated the trade between 1875 and 1900.

Scenes from the Move

Planning to move 47 Sigourney Street took nearly 10 months. The project was supported financially by Aetna, the State of Connecticut, and the City of Hartford. Beginning on June 7, 2004, preparation to move the house began, and just over a month later, on July 18, 2004, the Victorian Lady began its move to 21 Ashley Street. The move took two days due to its slow pace - as luck would have it, the actual Asylum Hill (the geographic feature as opposed to the neighborhood) is the highest point in Hartford, and it took more time than anticipated to get the Victorian Lady up and over the hill.

If you'd like a more detailed look at the move and all of what it entailed, scroll down.

Victorian Lady on the Move & In the News

The Victorian Lady's move was very well covered by local and national media, but it began as a story in the Fall 2003. The Hartford Courant editorialized about the house's future in October 2003, and the Hartford Preservation Alliance picked up the story beginning with its Autumn 2003 newsletter. The Courant and HPA were major lobbyists for the preservation of the house.

We provide here an overview of some of the press coverage the Victorian Lady received:

"Do You Need a Magic Wand to Move a House?" NINA flyer

"The Victorian Lady is on the Move!" NINA flyer

"Victorian House Schedule, 7/19 to 7/20" - Video Monitoring Services provided this list of television news programs that aired a story on the Victorian Lady on July 19-20, 2004.

Or was it the auto claims center? Actually, it was both, albeit at different times.

This is a quick look at the house at 47 Sigourney Street. We don't have much in the way of interior shots, but what we have does give a good sense of the last use of the house before we moved it.

This is a thorough, if lengthy, presentation that details the Victorian Lady's move from 47 Sigourney Street to 21 Ashley Street. It starts with how the house was prepared for the move, and it ends with the house in place, sitting atop its new foundation.